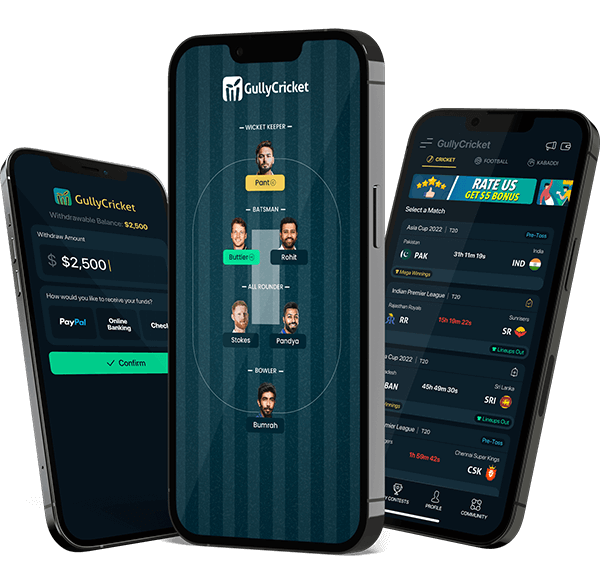 Our Bonus Offers Can't Be Beat Get a bonus of $10 free when you sign up Get a bonus of $20 for each friend you refer Get up to a $500 match on your first deposit

It's Easy to Start Winning on GullyCricket

Hear it from Our Winners

While I love cricket, I haven't played it in a long time, but I recently discovered GullyCricket, which challenges my understanding of the game, and makes me money in return. I won $1750 cash in the IPL match of Punjab vs Delhi. Cricket fans will love this app without a doubt.

I enjoy watching and playing cricket. I saw an advertisement of GullyCricket on facebook and downloaded the app. Last month I won $8000 on GullyCricket. I recommend this app to everyone.

GullyCricket is a very simple and easy to use app. I have won many $1000 dollar contests so far and wish to win more.

People Love us on all Platforms

Ready to challenge other sports fans?

Watch this video to learn how to play on GullyCricket and get started now. On GullyCricket, you can create your fantasy cricket team by picking the players who you think will perform best in any real-life cricket match. You can then compete with other user's teams for real cash prizes. Learn More

Yes! Cash prizes are awarded to the users who create the best teams. These prizes can be withdrawn via Paypal, Skrill, Check, or Direct Bank Transfer.

Yes. In the US the 2006 Unlawful Internet Gambling Enforcement Act (UIGEA) stated that Fantasy Sports, such as GullyCricket, is considered a game of skill, and thus legal. However, it is optional for each state to be able to accept. That is why GullyCricket is only available within some states, but not others. Within Canada, Fantasy sports contests are similarly considered a game of skill, and participation has always been legal.